Please note that, on this website, we will (for convenience) refer to Scottish Gaelic as just Gaelic. If, and when, we need ro refer to Irish Gaelic, we will describe this as Irish and if, and when, we need to refer to Lowland Scots, we will decribe this as Scots. Scottish Gaelic and Irish Gaelic, both evolved from Middle Irish, while Lowland Scots and Modern English evolved from Middle English. The other language that could appear in Scottish Munro names is Pictish, which is an extinct language spoken by Pictish people in Highland Scotland before Gaelic displaced it. Nobody is completely sure what type of langauge Pictish was, as there is almost no written evidence of it. It was earlier thought to be a non-Indo-European Iron Age language in existence in Britain before the arrival of the Celts, but it is now generally thought to have been an Insular Celtic language related to Common Brittonic, from which Old Welsh evolved.

The chart below shows the relationships between the languages that can form part of mountain names in the British Isles. 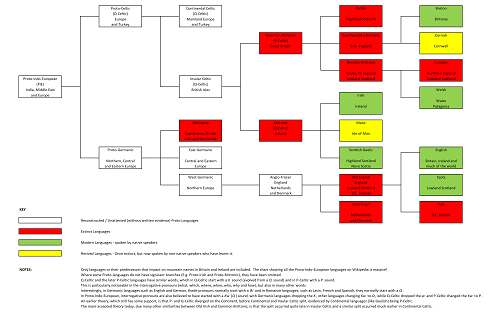 Click anywhere on the chart above, to open a larger version in a new window.